6 Ways Sleeplessness Affects Your Day: A Glimpse Inside Your Fatigued Brain It’s estimated that more than 30% of Americans get less than 7 hours of sleep a night. According to the CDC, individuals who do not get sufficient sleep are at greater risk of developing chronic conditions such as obesity, diabetes, high blood pressure, heart disease, stroke, and frequent mental distress. 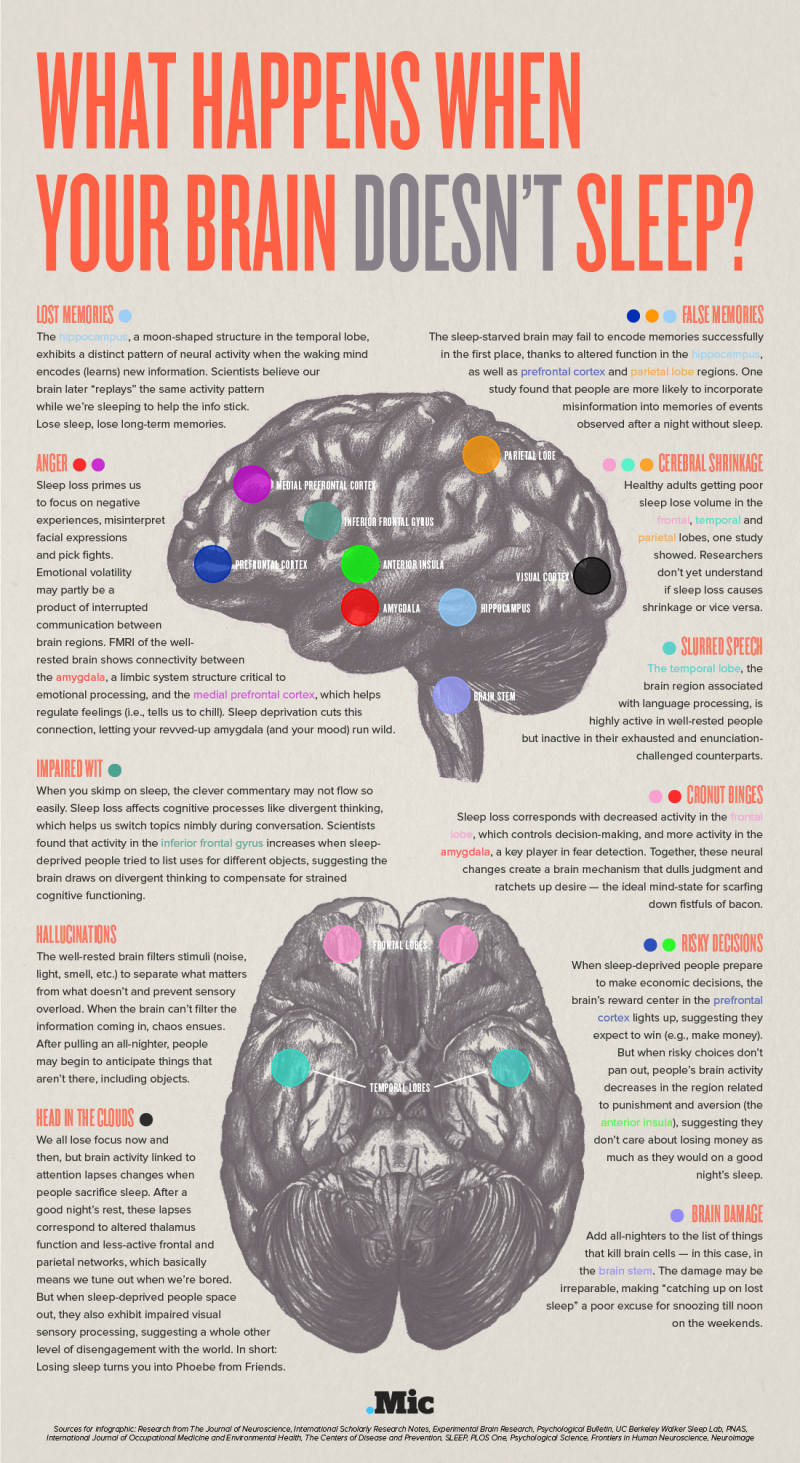 This is a great infographic by Mic that illustrates how sleeplessness and fatigue affect each part of the brain, resulting in:

Do you zone out at work, fantasizing about sinking your head into your soft pillow and curling up in your sheets? Many studies have confirmed the negative impacts of sleep deprivation and fatigue on focus, attention, and alertness. There is even new research suggesting that “75 percent of people with ADHD, attention deficit hyperactivity disorder, may have a chronic, underlying sleep problem stemming from a disruption to their circadian rhythms.”

The brain consolidates memories while you sleep, allowing you to form new ones when you awake. Sleep deprivation will not only blur long-term memory, but it will also make it harder to learn new things and form new memories. According to a recent study, this may be due to a loss of connectivity between neurons in the hippocampus, the region of the brain associated with learning and memory.

The prefrontal cortex which controls decision-making and judgments is especially harmed from a lack of sleep. Research has shown that sleep deprivation and fatigue can result in risky, impulsive behavior and a lack of self-control. Pretty dangerous if you’ve got a high-stakes job, or are already prone to online shopping.

This one’s pretty obvious. We’ve all fallen victim to the cranky grumblings of a sleepy grouch at some point in our lives. Knowing that it’s due to increased activity in the amygdala, the area responsible for negative emotions, and a disconnect between the amygdala and the area of the brain that regulates it, may help you empathize with and tolerate such grouches.

In 1965, a 17-year-old named Randy Gardner set the world record for the longest time awake for his high school science fair. He didn’t sleep for 264.4 hours, or 11 days. Today, it’s considered unethical to deprive research participants of sleep for more than 48 hours. Thus, the effects of extreme sleep deprivation (besides death) are not clear. However, whatever the cause may be, scientists estimate that 80% of people will hallucinate after 2-3 days of sleep deprivation.

These 6 are just a few of the many ways in which a few hours of sleep can change your day. So, if you’re working in an industry prone to accidents and injury, such as construction, transportation, mining, healthcare, manufacturing, and agriculture, an innocent little yawn could become the precursor of a much more destructive day ahead.

Because sleeplessness is not a risk these industries can afford.

One study by CNH-Iveco found that a quarter of the truck drivers studied in Italy had a sleep deficit of over 2 hours. More than a quarter of the drivers suffered from insomnia, and 13.4% suffered from excessive daytime sleepiness. It further found that ⅓ of the drivers in the study had a driving accident in the past 3 years, and 10% had a near-miss accident within the past 6 months.

And it’s not just truck drivers and the transportation industry that bear the costs and risks of fatigue in the workplace.

According to the Price of Fatigue: McKinsey and Harvard Medical School Report, the economic cost of unmanaged OSA [Obstructive Sleep Apnea] in the US is between $65 billion and $165 billion.

Advanced Sleep Medicine Services further reports on the burden on the US economy:

Other studies have gone so far as to equate the symptoms of sleeplessness to drunkenness.

Professor Itzhak Fried described the findings of his study at UCLA:

“We discovered that starving the body of sleep also robs neurons of the ability to function properly…Inadequate sleep exerts a similar influence on our brain as drinking too much. Yet no legal or medical standards exist for identifying over-tired drivers on the road the same way we target drunk drivers.”

Despite this lack of legal and medical standards for identifying and measuring the effects of fatigue and sleeplessness, modern technology has made leaps and bounds to assess and manage this risk within many at-risk industries.

To manage fatigue while at work, check out these fatigue countermeasures. To prevent if before it becomes a problem, check out AlertMeter.

PRISM is the industry leader in being able to accurately predict when a worker will be at risk for fatigue, and when combined with AlertMeter, can also detect any-cause impairment providing supervisors with objective data to optimize safety and productivity.

“Our initial concern was two-fold: workers reporting without an adequate amount of sleep, as well as a defense against substance impairment. We found the AlertMeter® to satisfy both of our needs. An added benefit has been that since employees know that they will be tested daily, they are reporting to work in a better condition and ready to go to work.”